10 awe-inspiring locations in one...

A bucket list guide to the world’s largest sand island - Queensland’s ultimate adventure destination. Only 3.5 hours' drive from Brisbane, and with direct flights from Sydney to Hervey Bay, this World Heritage wonder is closer than you think... 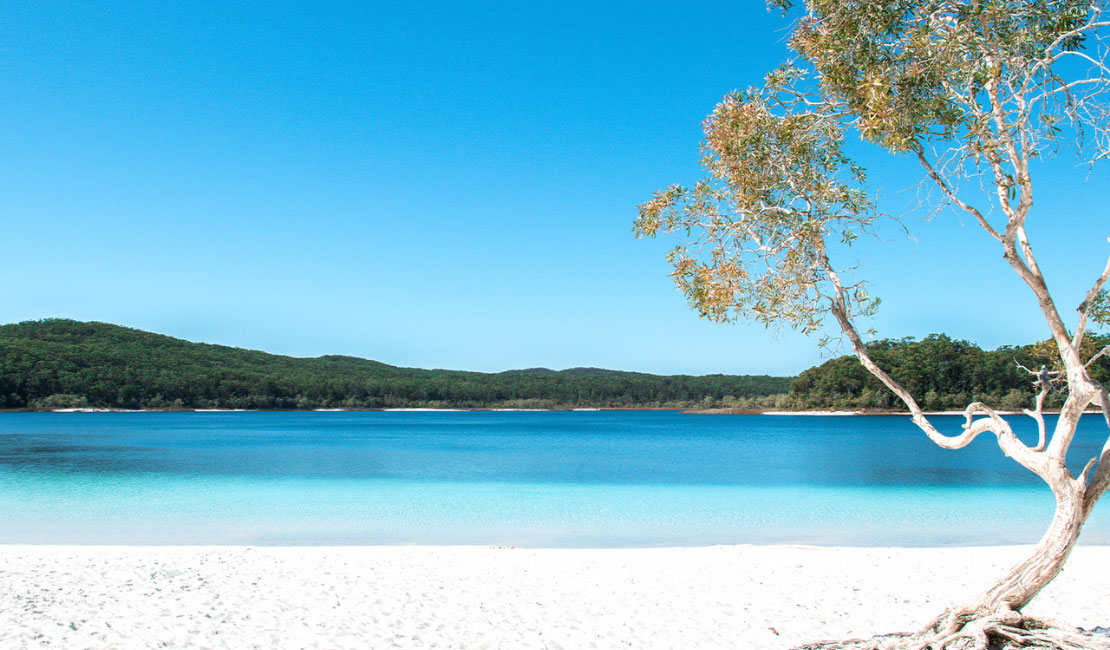 Renowned for its brilliant blue hues and pristine white sands, this freshwater lake is the definition of paradise! Located in the heart of Fraser, Lake McKenzie, or ‘Boorangoora’ as it’s named by the Butchulla people, is the most visited natural site on the island.

This perched dune lake, one of forty of its kind on Fraser Island, is fed entirely by rainwater, sitting high on the sand dunes, approximately one hundred metres above sea level.

Paperbark trees are dotted along the shore, and the ever-so-fine silica sand acts as a filter, giving the water its clarity and defined turquoise gradient. With temperate depths, this pure oasis is an idyllic year-round swimming spot, and a must on every island itinerary! 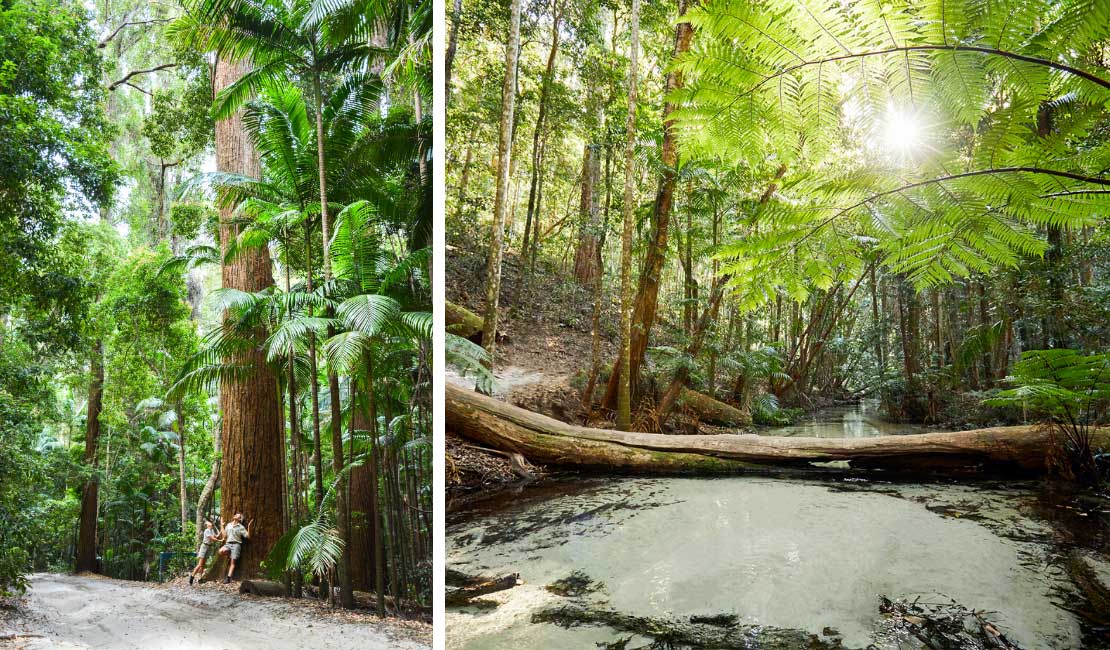 This historic centre of Fraser Island is home to soaring satinay trees, kauri pines and a range of remarkable rainforest plants. The satinays were once logged for their hardiness, used to rebuild the London Docks after WWII. Today, this enchanting environment is now protected – one of the first rainforest areas in Queensland to be recognised under the Queen’s Commonwealth Canopy initiative, to conserve the Forests of K’gari. 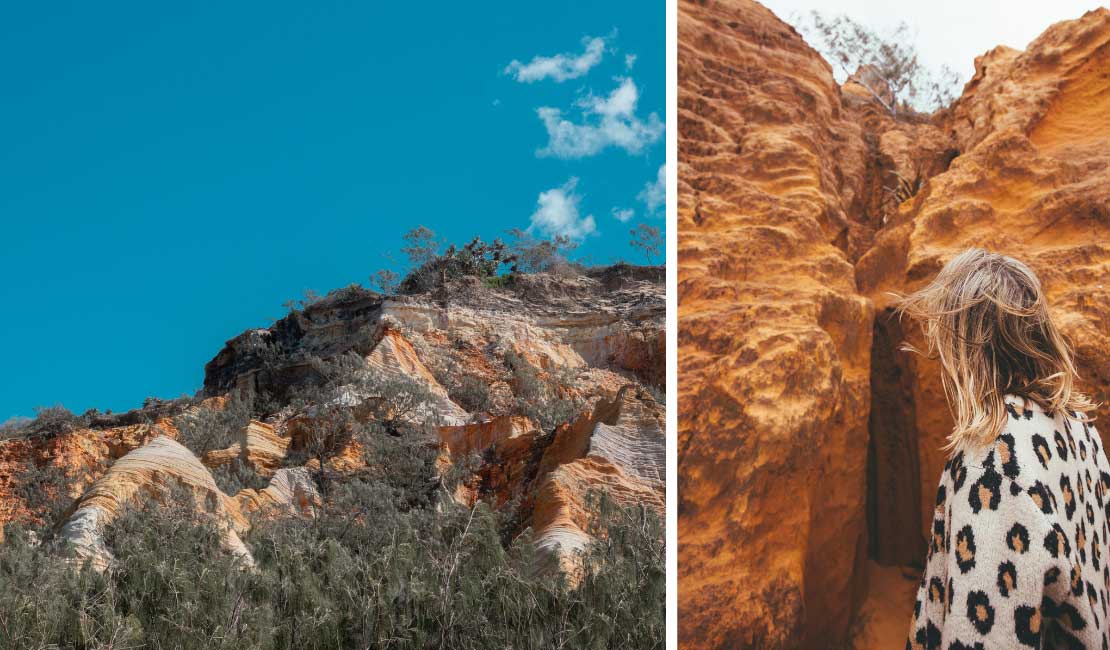 Located along the eastern beach, The Pinnacles Coloured Sands comprise over seventy-two shades of red, yellow, and orange - stained due to the iron-rich minerals within the sand and clay. These rugged formations loom high above the coastline, with the layers said to have formed over many years, due to wind and rain exposing the cliff’s core. TRAVEL TIP – A spectacular time to visit is in the early morning, as the sun rises, hitting the cliff’s surface. 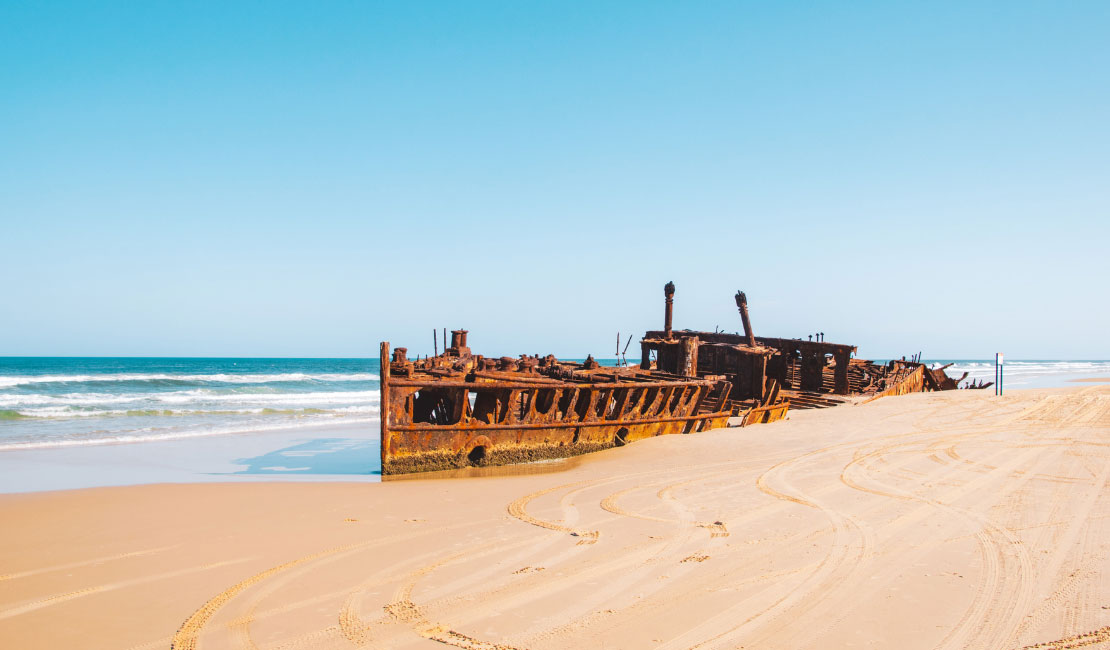 Built in Scotland in 1905, the SS Maheno was once a well-known Trans-Tasman liner, later commissioned as a hospital ship during the First World War. The Maheno was bound for Japanese scrap metal when it was run aground by a cyclone in July 1935. This historic hull is now an iconic landmark along 75 Mile Beach, with its rustic ruins a must-see for many.

Discover the pristine white sands and crystal-clear saltwater of Pelican Bank - a small sand caye located off the remote western coast of Fraser Island…and a little slice of paradise at that. Easily accessible aboard a Sea Explorer cruise from Kingfisher Bay Resort, travellers can explore the island’s quaint, yet stunning surrounds, with sweeping 360 views across the Great Sandy Strait. 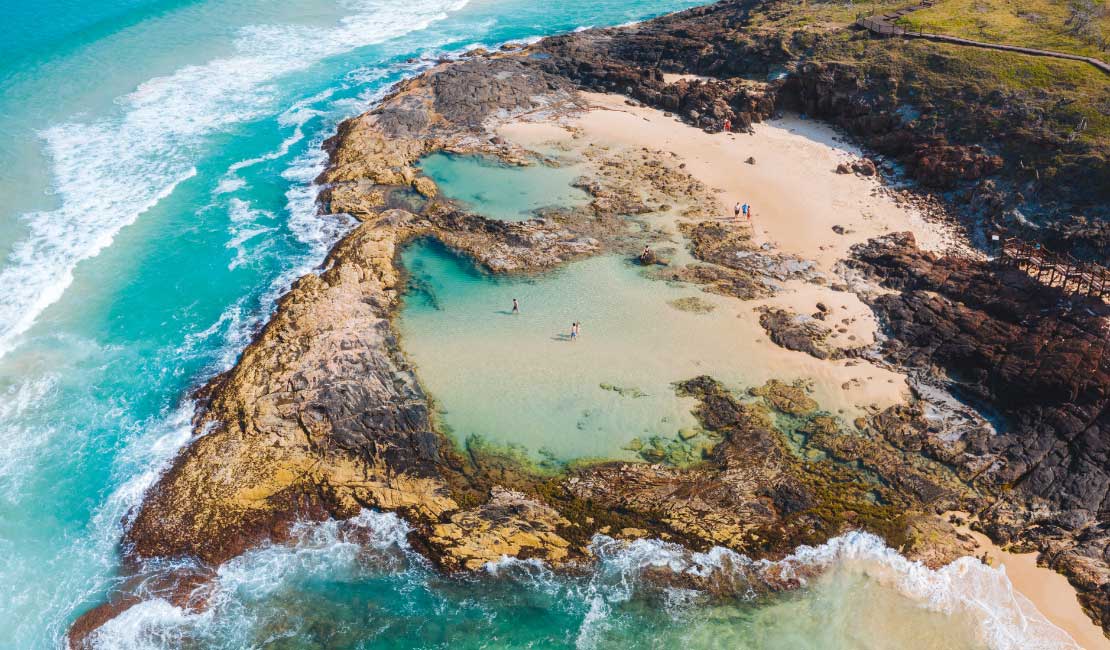 Navigate along the east coast, just north of Indian Head and soon you’ll find the only saltwater swimming location on 75 Mile Beach. Immerse yourself in these aptly-named rock pools, as the ocean’s waves crash, bubble and fizz over the volcanic rock formations, just like Champagne!

For the 4WD'ers, base yourself at the recently renovated K'gari Beach Resort (formerly Eurong Beach Resort), set your alarms and navigate north, to enjoy a full day of fun at this spectacular swimming spot. Or why not join a multi-day guided tour, with comprehensive itineraries that include the Champagne Pools and many more of the destination's most coveted locations.

One of the island’s most popular watering holes, is Eli Creek – the largest creek on the eastern beach. With over four million litres of clear, fresh water flowing into the ocean every hour, the gentle current is perfect for a float, weaving your way along the tree-lined banks, as light glistens through the pandanus leaves. Park up on the beach for a picnic and stroll along the winding boardwalk, or simply spend the afternoon in the sunshine, as the kids splash in the clear, shallow depths. 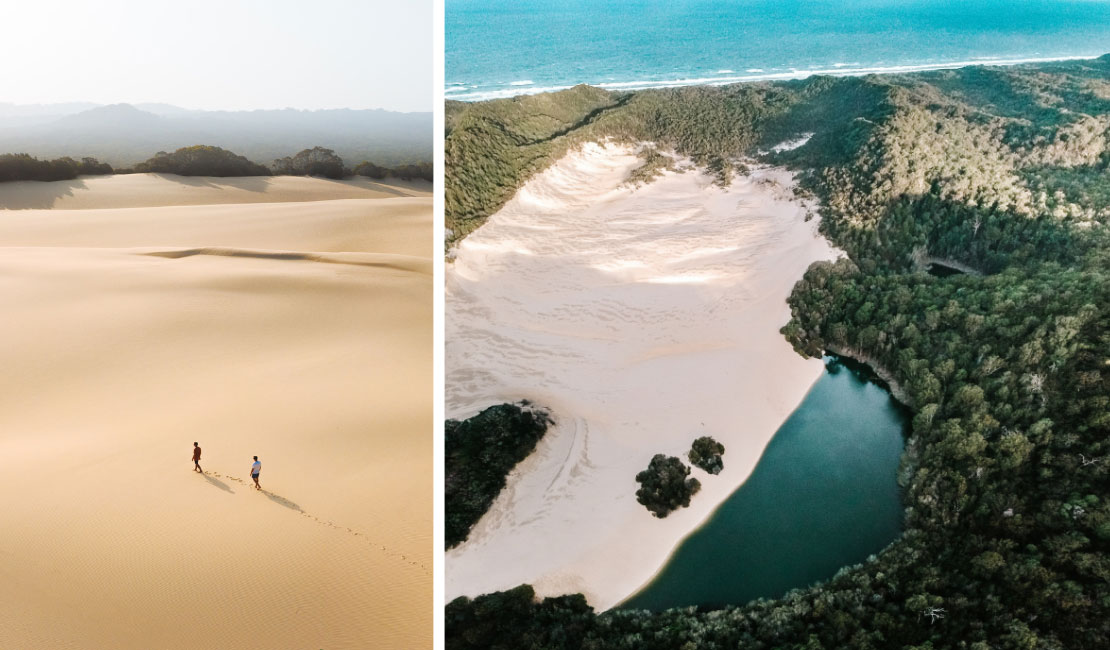 Nestled within the native bushland and coastal sand dunes of the eastern beach lies a hidden gem... the ever-evolving, emerald-green oasis of Lake Wabby. Known as both a window lake and a barrage lake, this unique swimming spot is located at the base of the golden Hammerstone Sandblow, and will one-day be engulfed by the island’s slowly shifting sands. But for now, travellers (and a few species of fish) can revel in this picturesque freshwater beauty. 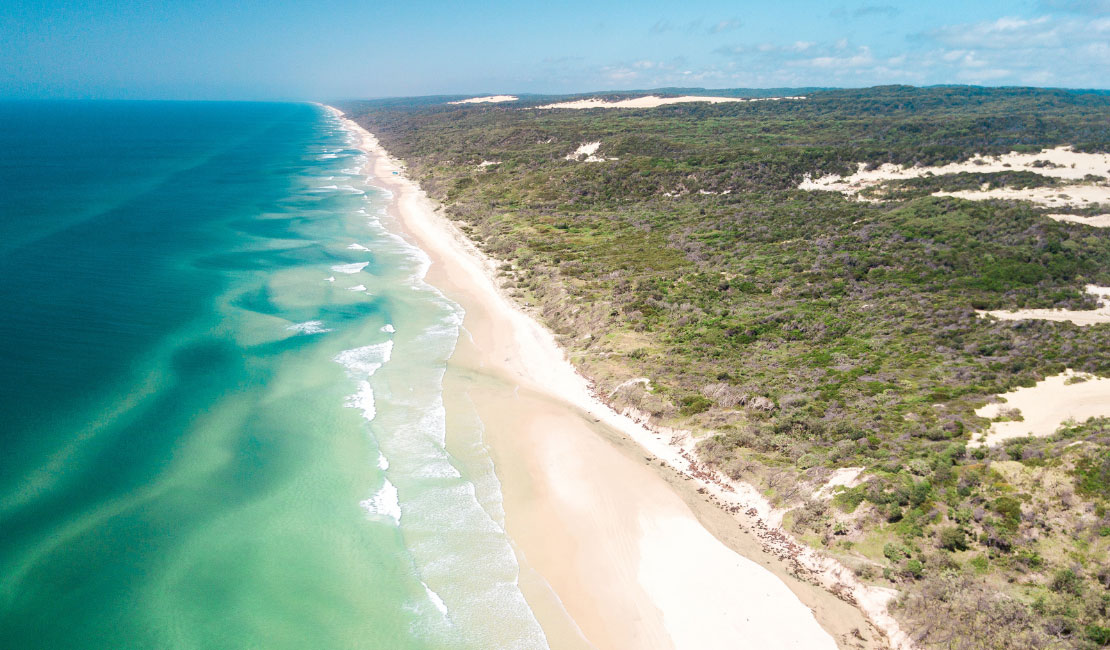 As the name implies, this is one vast beach, which also runs the length of Fraser Island. An official Australian gazetted highway, this stretch of coastline also acts as a runway – one of just two places in the world where planes can take off and land on the sand. Year-round, the shore is dotted with fishermen casting for tailor, whiting and more, as 4WD’s cruise up and down in between the tides to some of the destination’s most desired locations. 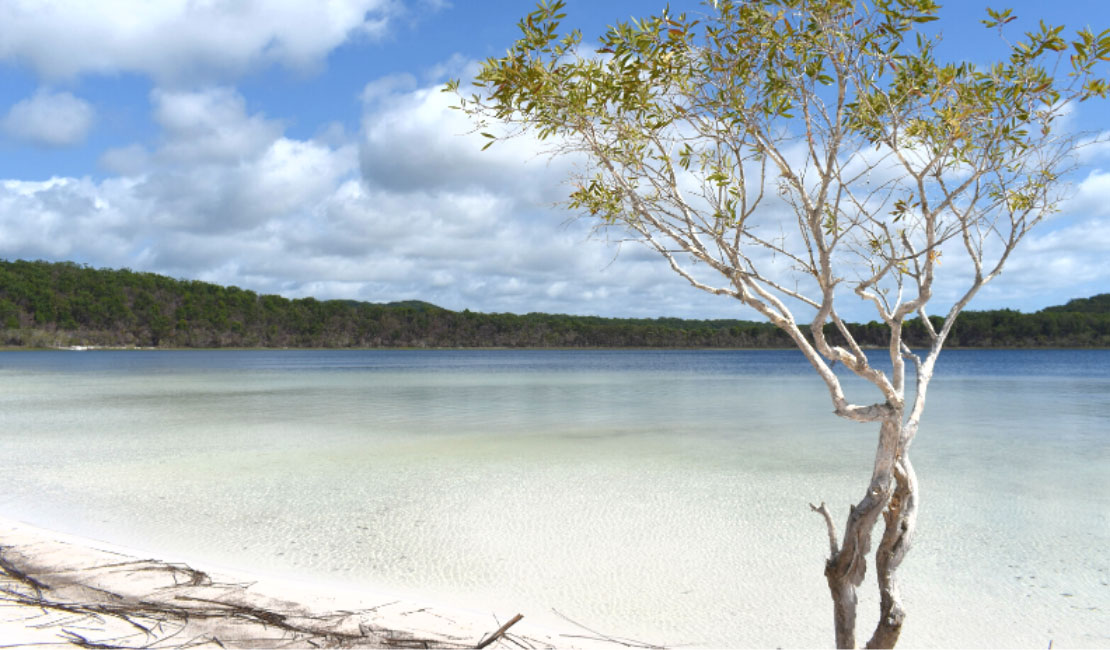 At a quick glance, this could easily be mistaken for the famous Lake McKenzie. This lesser-known, but equally spectacular lake is often much quieter than her look-alike sister, offering travellers an exclusive swimming experience.

Also a perched dune lake, all organic matter is filtered out through the sand, allowing it to maintain its astonishing crystal clear appearance – swim without the crowds and soak up some island sunshine.

Discover the natural wonders of K'gari...